Sally Goodden is a professional animal artist. Having grown up on a butterfly farm she has always been passionate about nature. With a BA (Hons) Degree in Scientific Illustration she worked for many years as a freelance illustrator for publishers such as Usborne, Kingfisher and Harper Collins.

Sally specialises in painting animal portraits. Capturing the animal’s energy and character in the eyes is the key focus, and Sally discusses colours and styles with each client to create a beautiful work of art tailored exactly to them. To enjoy some of her animal portraits see the Contemporary Pet Gallery or if you would like to find out more about commissioning your own animal portrait go to Commission Me.

Sally was delighted to be chosen as one of this year’s Hares of Hampshire artists, painting Oriana Hare, sponsored by Ineos. Throughout the Summer of 2022, a spectacular sculpture trail of hares was placed throughout Winchester and Southampton, for everyone to enjoy. At the end the hare sculptures were auctioned to raise money for the Murray Parish Trust – Oriana raised £3,900 and the total raised by the auction was over £180,000! This phenomenal sum will go to improve services in the Children’s Intensive Care Unit at Southampton General Hospital.

Click on the photos below to see the process of painting Oriana.

Oriana (meaning new dawn) is all about hope and renewal – just what we need after the last couple of years! She is painted in joyful rainbow colours, with metallic highlighted details to glint in the sunshine. The spiral is a strong symbol of new beginnings, portrayed here in the ammonite and emerging ferns. Daffodils, daisies, sunflowers and the lotus flower all symbolise renewal, as does the Zibu symbol on the bridge of her nose. The leaping hare created from young saplings, and the butterfly, continue this invigorating theme, along with the phases of the moon, so often associated with hares and renewal.

Two leveret sculptures have been painted by 30 young artists, under Sally’s supervision, for Hampshire Scouts.

Robert is in the ARC Winchester Cafe window, and Jacob is in the Ballet Pointe on the ground floor of the Brooks Shopping Centre. They even have their very own hashtag!  #hsleverets

Click on the small photos below to see larger snippets of them being painted by these amazing young artists.

Sally has painted several murals in schools and hospitals in Southampton, Portsmouth, and Winchester which she completed just days before the 1st Covid-19 lockdown in March 2020.

To see lots of photos of these go to murals.

Sally teaches weekly after school art classes and holiday workshops for children in her garden log cabin, as well as zoom sessions and video tutorials – for more details go to art classes. For adults she offers art group workshops and relaxed evening painting events in the art cabin.

Here are some photos from a 2 hour evening at Bay Leaves Larder with chilli and wine, painting a moon-gazing hare – just look at all the concentrating, then happy faces with fabulous results!

In 2016 Sally was chosen to paint a zebra sculpture for Marwell’s Zany Zebras sculpture trail. Over 100 brightly coloured and uniquely designed Grevy’s zebra sculptures were placed throughout the streets of Southampton for the Summer, and then auctioned at the end to raise money for Grevy’s zebras in Africa.

The local radio station, Wave 105, held a children’s competition to design their zebra and Daniel Granger’s half zebra/half giraffe creation, named Zeffe, was chosen. Sally’s job was to recreate this on a large sculpture (and a mini Zeffe that went on display at Marwell).

Sally also painted the half-sized ‘Black, white and read all over’ zebra for the Daily Echo newspaper.

Recently Sally illustrated a children’s book about a little boy who needed to learn more manners to meet the queen.

And this is where the murals really started a very long time ago! Travel has always been a great passion, during which Sally has gathered reference for many of her paintings and drawings. In Ghana, West Africa, she was the Expedition Artist for the charity Raleigh International, motivating the volunteers to paint educational murals in expedition-built schools, latrines and a day care centre.

Nature at the Core

Nature is Sally’s constant source of inspiration. She lives in Chandler’s Ford, near Winchester, Hampshire, with her husband and two children who have also caught the nature bug.

“In an age when so much wildlife is threatened – from large mammals through to tiny insects – I am passionate about highlighting and celebrating the wonder and beauty of animals and plants through art.”

Sally’s original paintings are hung regularly each year in wildlife art exhibitions. She sells her art at regular art markets and events. These range from original art, to prints, greetings cards, lampshades, cushion covers, placemats and coasters – something to suit every budget and all available here in her online shop.

All images used on this web site, and produced by the artist, are the property of Sally Goodden. All rights reserved. If you would like to use any of the web site images for personal use please contact Sally for permission. 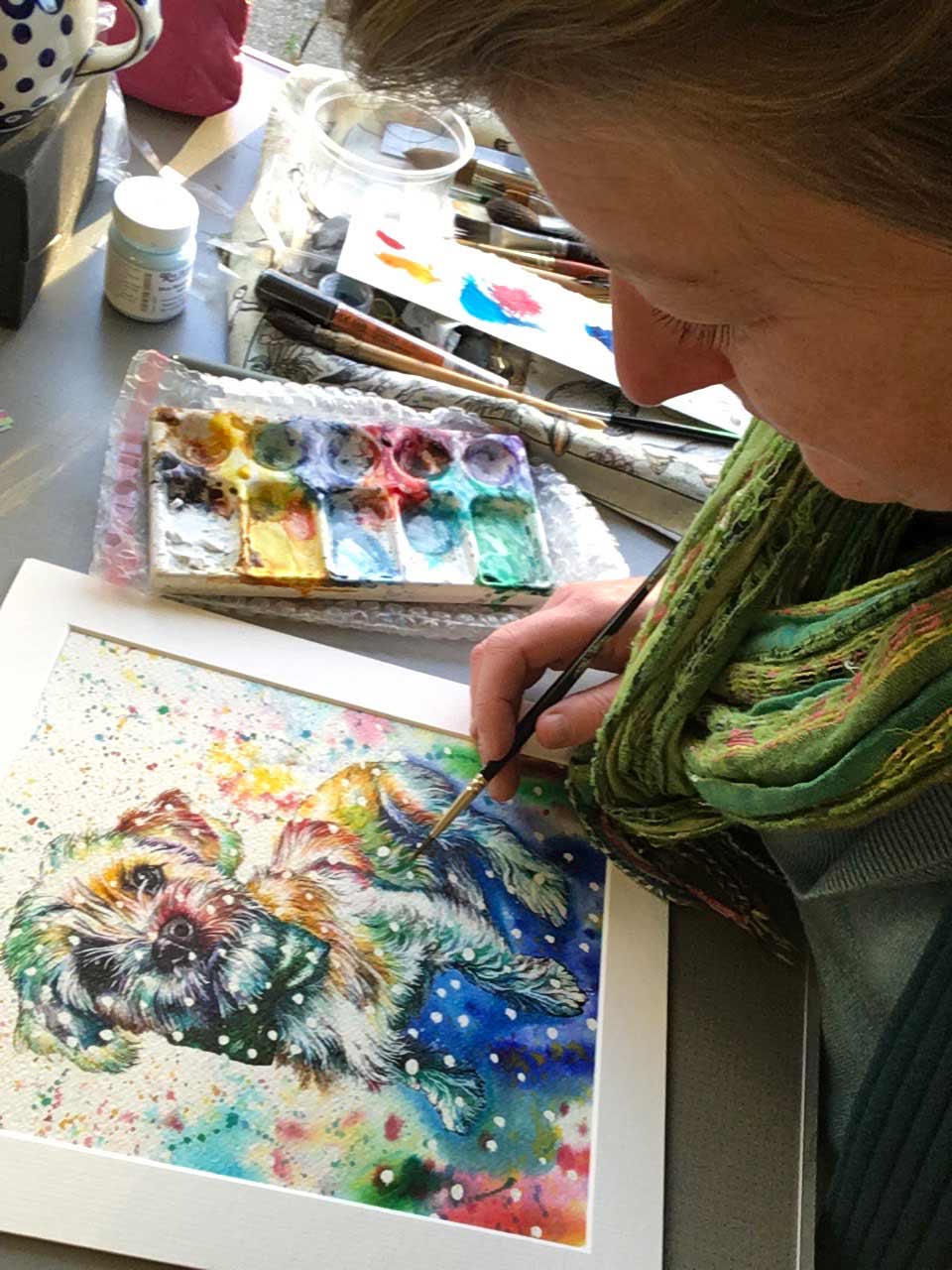